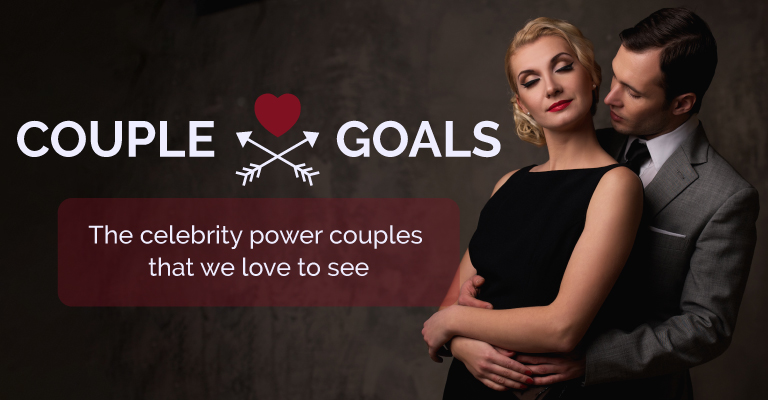 Everyone has their favourite celebrity couple, though not all are destined to last. We’re excited to reveal the top celebrity couples that rule the roost for balancing a long and loving relationship with the media and the attention that being an A-list star attracts.

Everyone has their favourite celebrity couple, though not all are destined to last. Whether due to the additional pressure of the paparazzi or run-of-the-mill personal issues that we all experience, the world of celebrity dating can be fast-moving and tumultuous.

To rediscover the magic of high-profile romance, we wanted to look at some of the most prominent and successful celebrity matches that are still going strong today. From actors to athletes and comedians to writers, we’ve pulled together a list of the world’s most famous celebrity couples, comparing them against one another across several factors.

We’re now excited to reveal the top celebrity couples that rule the roost for balancing a long and loving relationship with the media and the attention that being an A-list star attracts. Unfortunately, we can’t say what exactly makes these pairings so successful, though finding the perfect engagement ring is a good place to start! If there’s one thing we can be certain of, is that some of these weddings will have been out of this world!

Having looked at a range of factors, from the popularity of these celebrities on social media to the length of their relationships and marriages, we can now reveal the most successful celebrity couples out there. 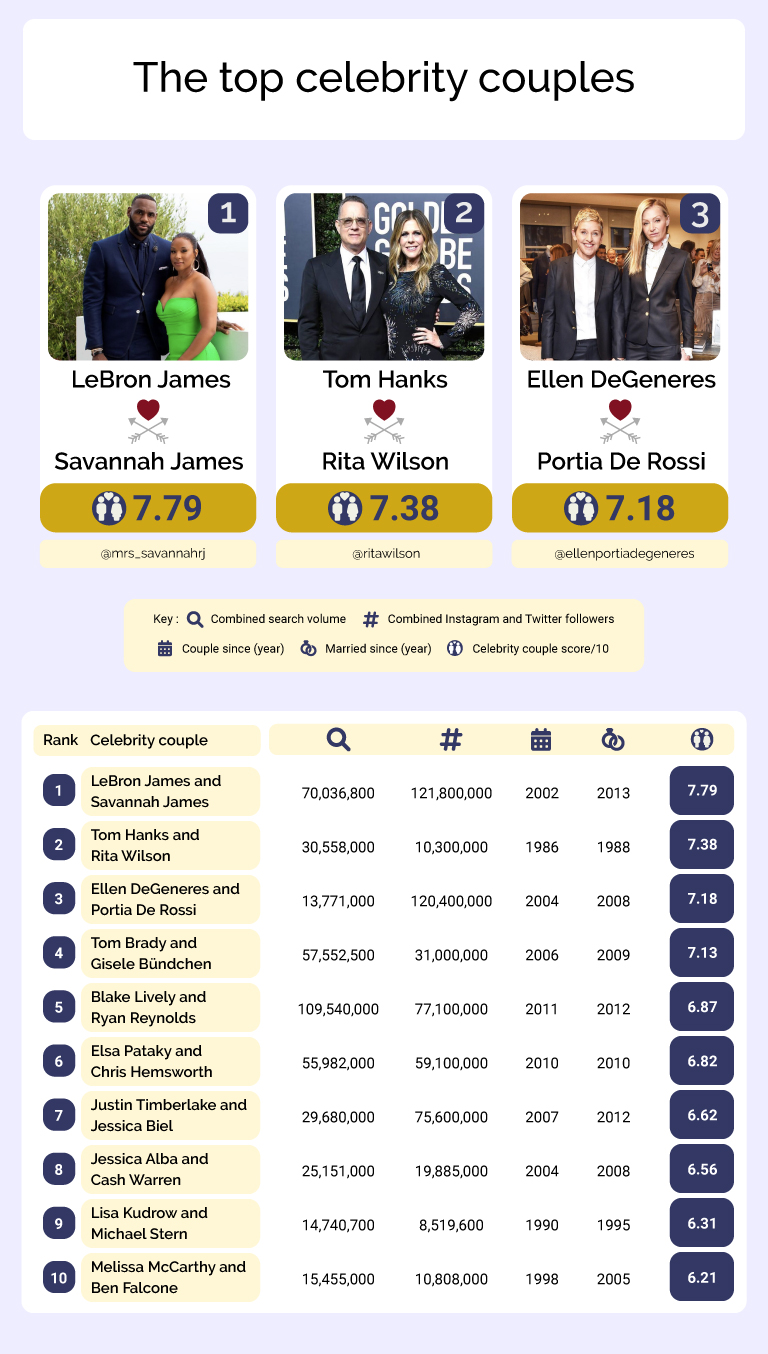 LeBron James and his wife Savannah are the most successful celebrity couple with an overall score of 7.79 out of 10. These two lovebirds met in their teens and have been together ever since, getting married in 2013 with their relationship turning 20 years old this year. Not only have they been together for a lengthy period of time, but they have some of the highest numbers of online followers out there, proving they’re still relevant today.

Tom Hanks and fellow actor Rita Wilson take second place with a celebrity couple score of 7.38. The couple have been married since 1988 and have two children together, which is a more than successful pairing by any standards.

In third place are Ellen DeGeneres and Portia De Rossi with a celebrity couple score of 7.18. The couple have been together since 2004, getting married in 2008 following California’s legalisation of same-sex marriage.

Here we can see which celebrity couples have been married the longest, proving that despite the pressures of stardom, it is still possible to find lasting love. 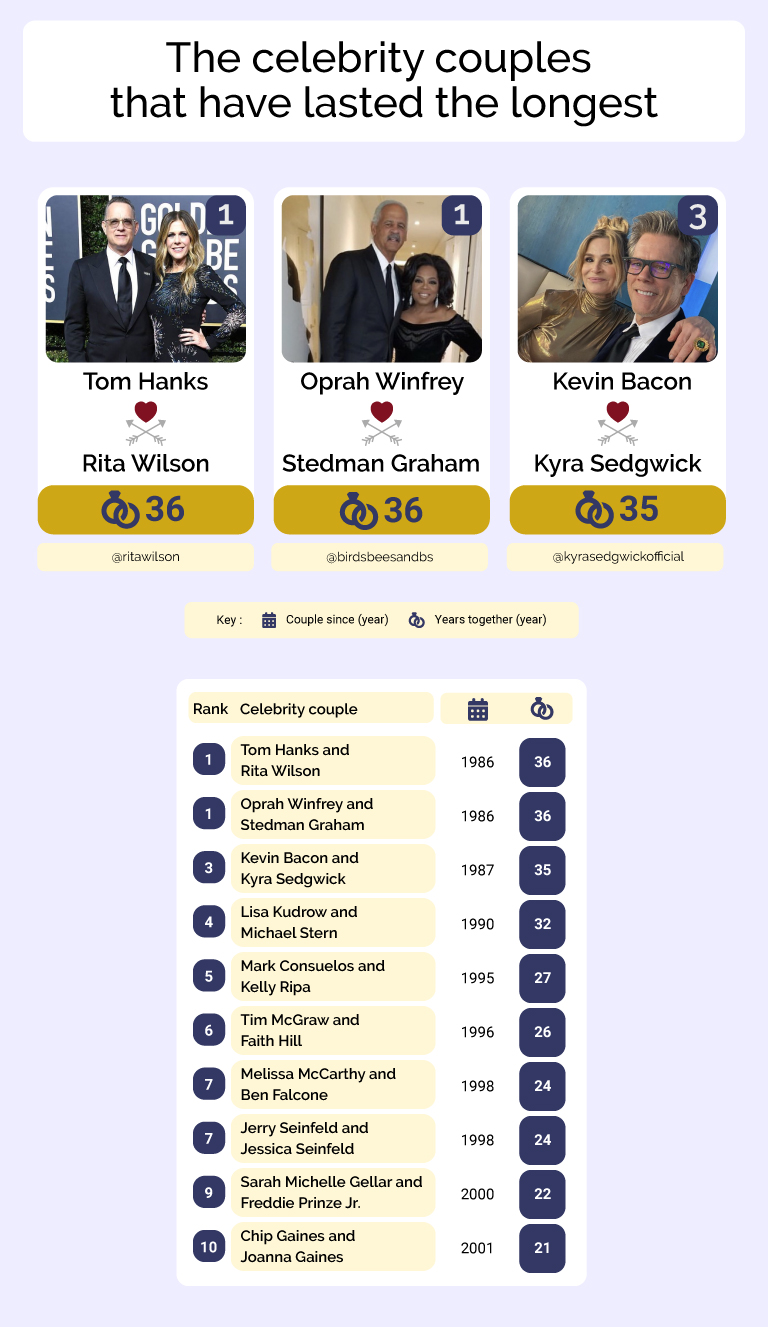 Our two longest celebrity romances are that of Tom Hanks and Rita Wilson, as well as Oprah Winfrey and Stedman Graham.

Unlike Hanks and Wilson, Oprah and Stedman never got married. While they were engaged to be married in November 1992, the ceremony never took place, and Oprah has since said in interviews that she simply liked how the relationship was and didn’t want it to change.

She also claimed that had they gotten married, they likely wouldn’t have stayed together, proving that marriage really isn’t for everyone and you can have a more than fulfilling relationship without it.

Kevin Bacon and Kyra Sedgwick started dating after working together on the set of the 1987 PBS production of Lemon Sky, though they didn’t hit it off immediately. While Bacon was keen to get to know Sedgwick, going as far as inviting everyone out for dinner after a day of shooting just to have the chance to take her out, Sedgwick was less enthusiastic, being the only one to decline his offer.

Despite this initial setback, the pair did get together fairly quickly and have now been in a relationship for an impressive 35 years.

These are the couples who had a whirlwind romance, quickly tying the knot and committing themselves to one another despite having dated for only a short time. 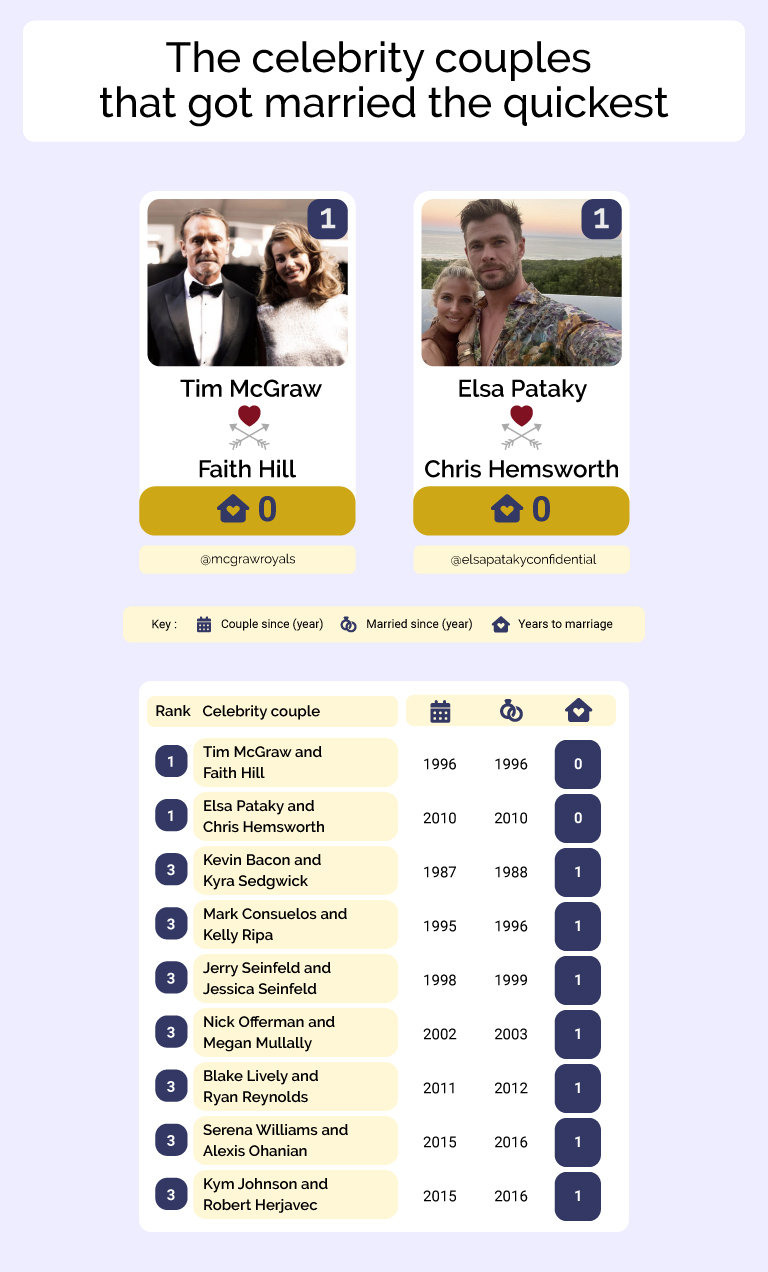 The two couples who got married the fastest, taking their wedding vows the same year they started dating, are Tim McGraw and Faith Hill along with Chris Hemsworth and Elsa Pataky. Getting married so quickly can be a big risk, but if your heart is set on someone and you’re head over heels, then why wait?

In this section we look at the celebrity couples who dominate Twitter with the highest combined following on the platform. 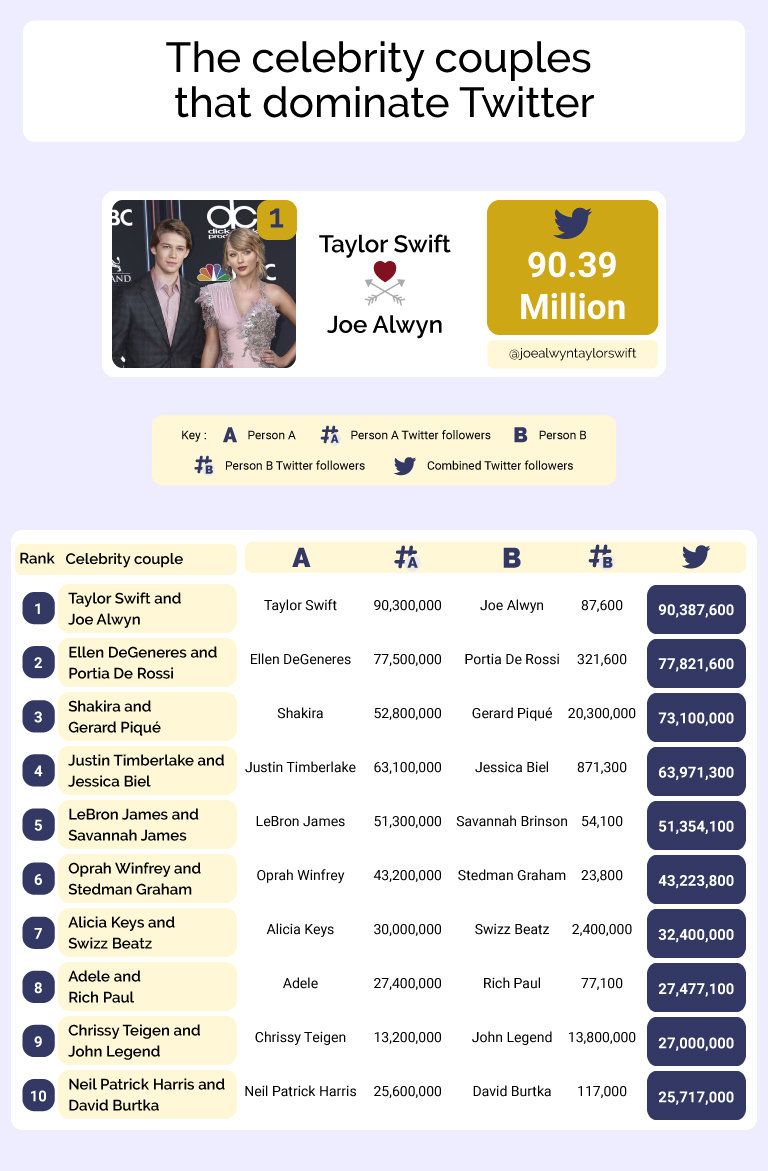 Taylor Swift and Jo Alwyn are the biggest celebrity couple on Twitter, with as many as 90.39 million followers between them. Admittedly, only 87,600 of those followers belong to to Alwyn, but just like relationships, this is a team effort!

The couple are followed by Ellen DeGeneres and Portia De Rossi on 77.82 million followers, and Shakira and Gerard Piqué on 73.1 million.

We wanted to consider more than one social media platform, as different celebs might be more active or popular in different places. Again, we’ve ranked our celebrity couples by the combined number of followers that they have on the platform. 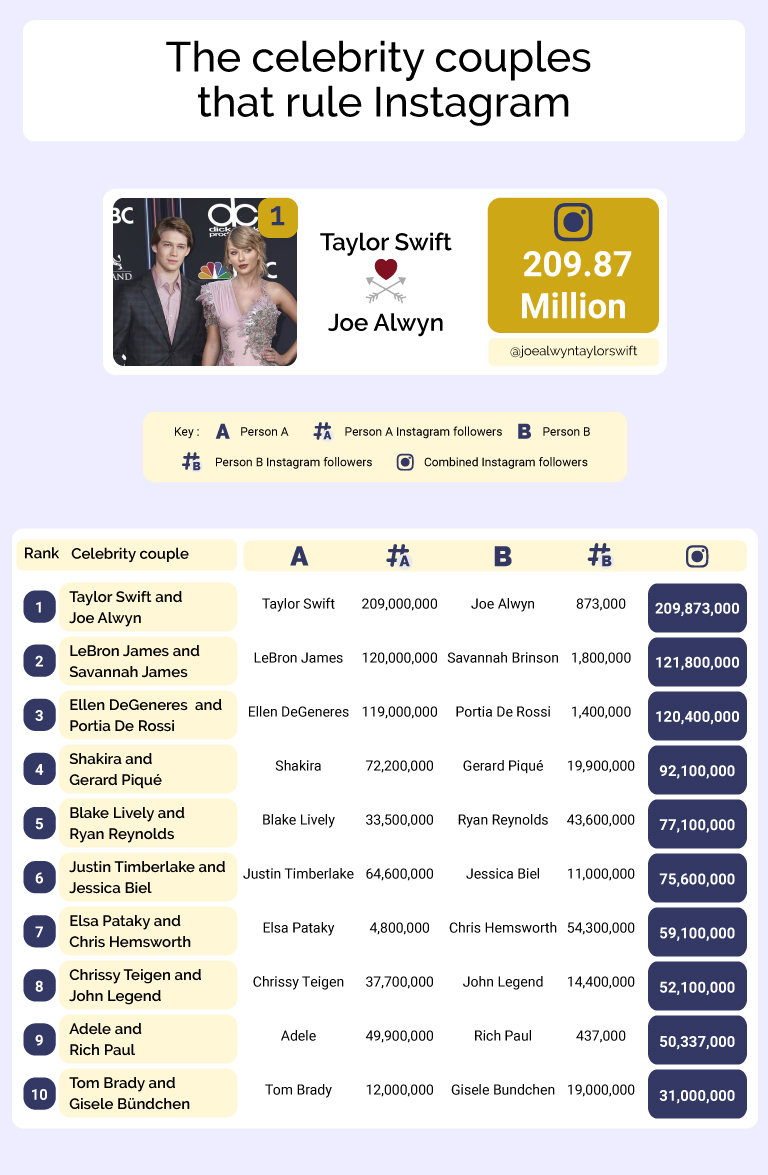 Once again, Taylor Swift and Joe Alwyn take the top spot, this time with 209.87 million Instagram followers, which is more than double their following on Twitter.

This time they are followed by LeBron and Savannah James, who take second place with 121.8 million followers, while Ellen DeGeneres and Portia De Rossi come a close third with 120.4 million.

Here we focus on the celebrity couples that we’ve searched for the most over the last 12 months, indicating that they’re current and relevant to today’s public. Again, we’ve combined the search volumes for both people in each couple to present a single figure. 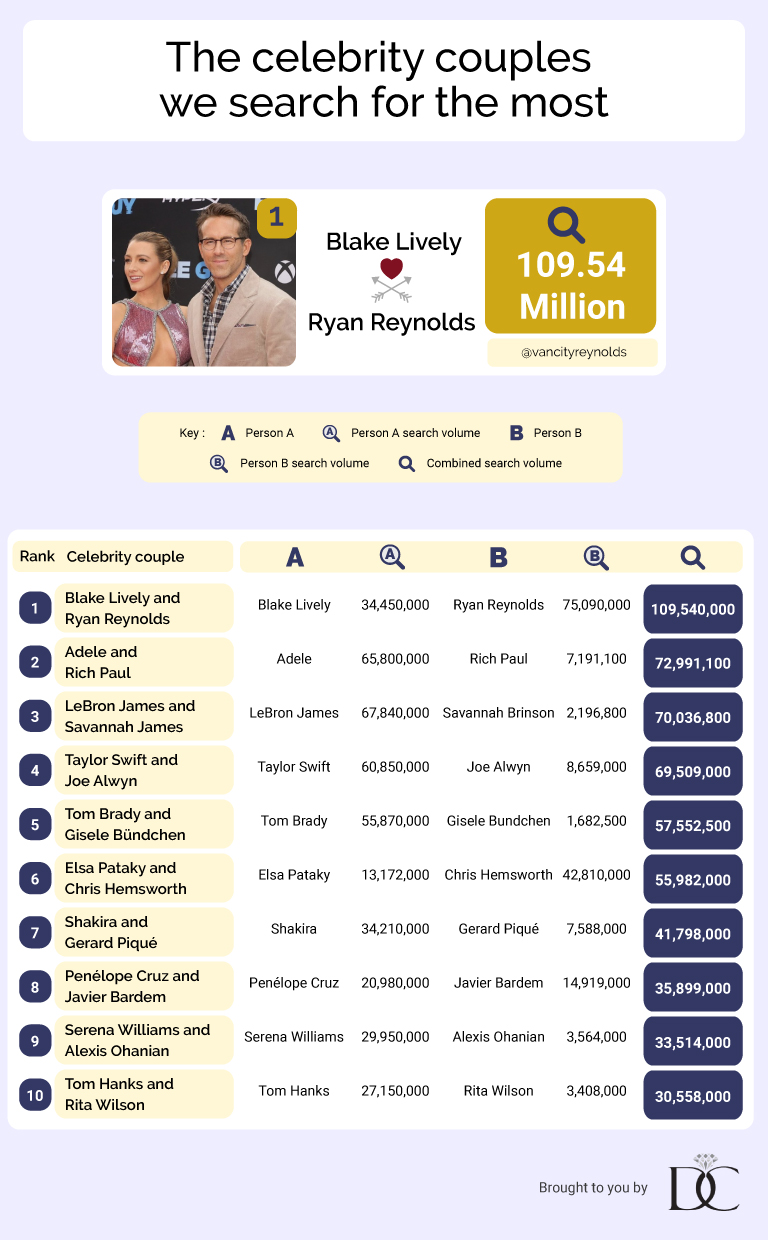 Blake Lively and Ryan Reynolds are the most-searched celebrity couple out there, with as many as 106.54 million searches between them over the last year. The pair first met in 2010 while filming Green Lantern and they started dating the following year, getting married soon after in 2012.

Taking second place are Adele and Rich Paul, with 72.99 million searches who’s budding new relationship is making all the headlines as they acquire their new £47 mansion that used to belong to Sylvester Stallone. They are followed by LeBron and Savannah James in third place with 70.04 million searches.

We wanted to find out which celebrity couples are the most popular and successful. To do this, we first had to build a long list of celebrity couples, which we did using publications such as Parade, Bride and Elle as sources.

Once we had a our list, we then collected search data for each celebrity using Google Keyword Planner, as well as their Instagram and Twitter follower counts. These three factors could then be used to determine the popularity of each celebrity couple.

We also wanted to look at how successful each couple was, so we used a variety of sources including Wikipedia and news articles to determine the year in which each celebrity couple started dating, as well as when they got married. The length of their relationship and length of marriage could both be used to determine how successful and committed their relationships were.

Many celebrities did not have data available for some of these factors, so their couples were removed from the study so that we could still compare the remaining couples on a level playing field.